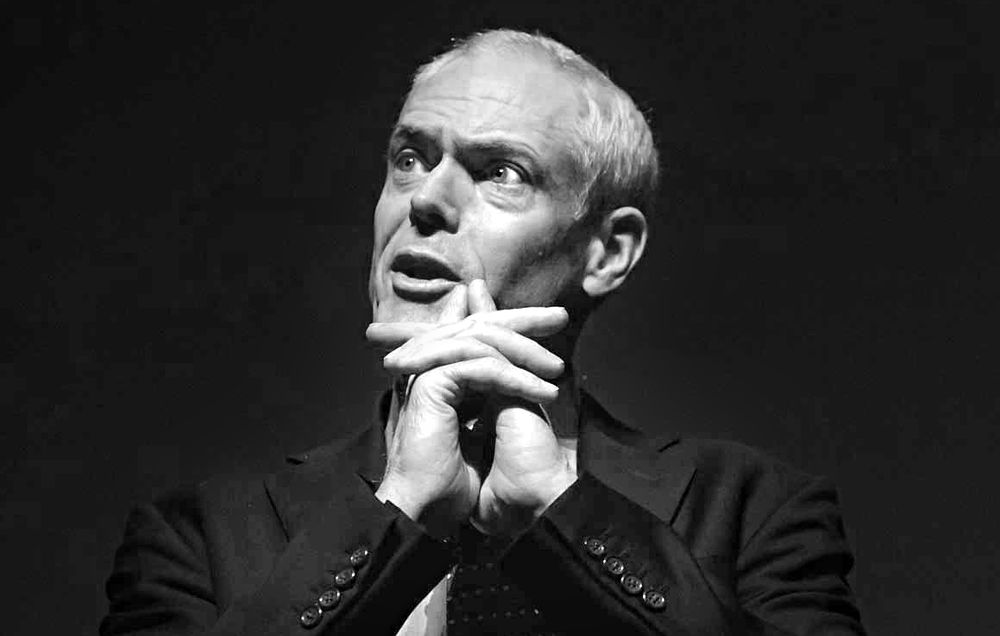 In a world first, Jim Collins has led a session solely on the topic of Level 5 leadership. Jim is one of the most sought-after speakers in the world, and has been named one of the 100 Greatest Living Business Minds by Forbes.

Almost 3000 delegates from 30 countries signed up with Growth Faculty to see Jim as our Global Headliner in his world-exclusive Good to Great® event Jim Collins: Develop Level 5 Leaders. Moderated by leadership expert and author Dr Kirstin Ferguson, the live virtual event was an amazing opportunity to learn from and have questions on leadership answered by Jim himself. Here is a brief summary of the event.

What makes a great company tick?

For decades Jim Collins and his team have extensively researched “What makes a great company tick?”

Jim says this leads to ‘the real question’: What are the underlying principles that lead to great results and lasting endurance?

Firstly, what is leadership?

Jim Collins’s definition of leadership is: “The art of getting people to want to do what must be done.”

He dissected the definition thus:

A Level 5 leader, power or not, sees what must be done and uses artistry to inspire people to want to do it.

What is Level 5 leadership?

Jim says Level 5 leadership is the underlying dynamic of humility and will.

“Humility and a ferocity of resolve. It’s the humility to put yourself in service to what you lead and what you contribute to the world. It’s the antithesis to ‘It’s all about me’.”

For a full overview of Level 5 leadership traits read our comprehensive article GOOD TO GREAT: THE KEY TRAITS OF JIM COLLINS LEVEL 5 LEADERSHIP

Importance of Level 5 leaders throughout an organisation

Good to Great companies were shown to have such Level 5 leaders at the helm, with Level 5 unit leaders leading pockets of excellence throughout the enterprise. Jim said each drove a 'minibus of greatness'.

“When they had their minibus they said ‘I will make what I am responsible for into a pocket of greatness.”

This highlights the importance of taking care of your people, not your career, and making every area of responsibility a pocket of greatness.

If you do this Jim says: “You are more likely to die of indigestion for too much opportunity and responsibility than starvation for too little.” Level 5 isn’t about charisma or personality

“As far as I can tell some Level 5 leaders had a charisma bypass!” - Jim Collins

Comparison companies (who did not succeed to the extent of the Good to Great companies) had a Level 4 at the helm. This could be seen as a genius with a thousand helpers. But ‘if the genius goes away you’re left with 1000 helpers’, Jim says.

“No single leader by himself or herself can make a company, but the wrong leader invested with power can single handedly destroy a company,” he cautions. 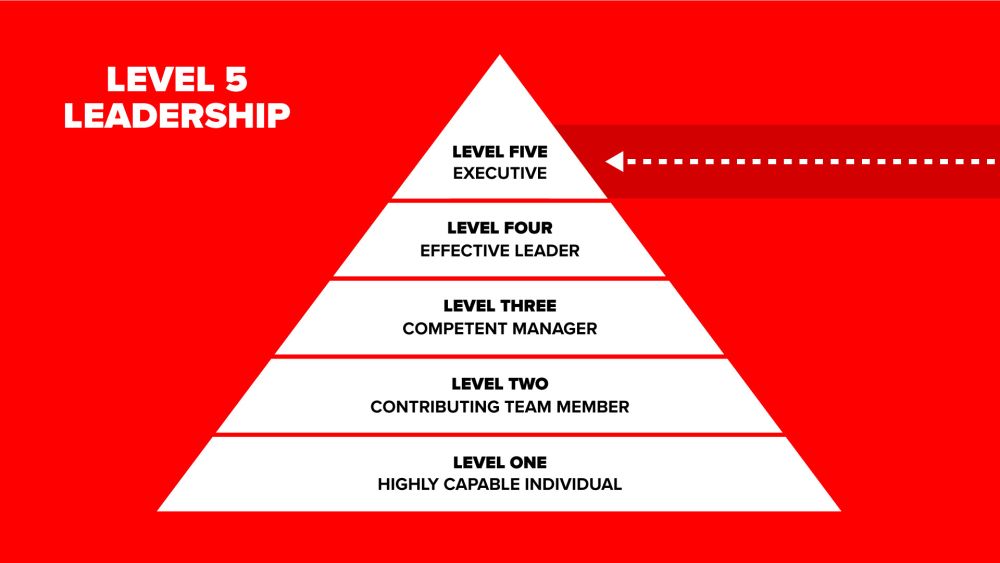 Looking in the mirror and out the window

A key trait of a Level 5 leader is looking in the mirror when apportioning blame (“I take responsibility”). Level 5 leaders never blame bad luck, other people or external factors.

When there are wins, says Jim Collins, the Level 5 leader switches focus to looking out the window, ready to credit other people for the success, or external factors and/or good luck.

When things go well for a Level 4 leader they stand in front of the mirror and take the credit. When things go badly they look out the window and blame others or external factors.

What you care about pulls both the humility and the will out of you. Self-doubt becomes “What is needed?” It’s like a magnet that is channelled into the cause.

Ask yourself ‘What cause are you leading in service to?’ That’s where the energy goes.

What questions might you ask people to reveal if they have Level 5 leadership potential?

You don’t know by interview, you know it under pressure of working with them. Level 5 leaders correct their ‘people mistakes’ quickly, and they perpetuate their good decisions for a very long time.

When hiring, ask questions that draw out stories of failures and successes - then listen for how they describe them through the lens of the window and the mirror.

Covid is a massive ‘luck’ event, as described in Great by Choice: “You didn’t cause it, it has potential consequences (good or bad), and you didn’t see it coming.”

Jim Collins says successful companies get a higher return on luck events, making more of their luck than others.

Jim suggests writing down the names of people who surprised you (on the up side) during Covid. Under the pressure of Covid they stepped up and said ‘this has got to get done’ – so explicitly note who those people are, and make them a bigger part of your leadership today.

Jim says for every important activity there should be One Person Ultimately Responsible (O.P.U.R.). To increase accountability ensure ‘people know what they are the OPUR of.’

Jim Collins story of studying himself like a bug

Jim shared his own process for discovering his personal leadership artistry.

“I bought a lab book, I studied myself like a bug. Everyone thought I was diligent but I was writing in the book, ‘I really hate being in meetings…this bug is really not happy here’.”

Given a project in 1983 to research network computing, Jim discovered a love of learning, distilling information into concepts, and teaching it to others.

“I wrote in my bug book - ‘That was a great day, I was effective.’ At some point I got an empirical sense of my peculiar ways of operating, and that’s what led to the career path that I am on.”

Jim says he has a box of all his bug books in his basement!

Jim says he has had a hybrid/remote model for 30 years and ‘it produces incredible teams’. He has never specified hours, and it has been that way since inception.

Two reasons it has worked well:

Jim believes the single most important thing across all aspects of leadership is the principle of ‘first who’.

Jim says to try to change every ‘what’ question into a ‘who’ question.

Be interested. John Gardner, founder of Common Cause, who knew Jim Collins from Stanford, said ‘Jim you spend a lot of time and energy trying to be interesting, why not spend more energy being interested?’ Jim says Level 5 leaders are interested in other people.

Be useful. Jim asked 86-year-old Peter Drucker which of his 26 books was he most proud of. ‘The next one’ he answered, and went on to write 10 more. Two-thirds of his life’s work happened after age 65. He told Jim, “It occurs to me you worry if you will be successful. That is the wrong question. The question is ‘How can I be useful?’

In summary, to become a Level 5 leader…find out how to be useful.

About Jim Collins: In 2017, Forbes selected Jim as one of the 100 Greatest Living Business Minds, Jim Collins is a student and teacher of what makes great companies tick. He has authored or co-authored a series of books that have sold in total more than 10 million copies worldwide. They include Good to Great, the #1 bestseller, which examines why some companies make the leap and others don’t; the enduring classic Built to Last, which discovers why some companies remain visionary for generations; How the Mighty Fall, which delves into how once-great companies can self-destruct; and Great by Choice, which uncovers the leadership behaviors for thriving in chaos and uncertainty. Jim has also published two monographs that extend the ideas in his primary books: Good to Great and the Social Sectors and Turning the Flywheel. His most recent publication is BE 2.0 (Beyond Entrepreneurship 2.0).

About Dr Kirstin Ferguson is an award-winning and internationally recognised leadership expert, executive coach, writer, and commentator. She has over a decade of experience on a range of company boards and was appointed by the Australian Prime Minister as Acting Chair of the Australian Broadcasting Corporation. She began her career in the military as an Air Force Officer. Kirstin’s second book, Head & Heart: The Art of Modern Leadership, will be published by Penguin Random House. She was named on the Thinkers50 Radar List in 2021 and was shortlisted for the Thinkers50 Distinguished Award in Leadership.

﻿If you'd like to increase the number of Level 5 leaders in your organisation why not consider a Growth Faculty Leadership Pass? 12 months of unlimited access to 40 live virtual events with the world's brightest minds - PLUS, you get access to year-round leadership content On Demand with videos, podcasts and book summaries.

Join a community of knowledge seekers who are inspired by the best. Choose the plan that's right for you and your team and See who's up next.

5 Characteristics of a Positive Workplace Culture

6 key areas for workplaces to address mental health and wellbeing