Why Patrick Lencioni’s pyramid model matters now more than ever

A recent PwC survey found nearly nine in ten (88%) executives said their company was experiencing higher turnover than normal. You can bet some of this high turnover sheets home to one or more of the five dysfunctions of a team.

Here we’ll list the five dysfunctions of a team, and how you can avoid them.

What are the five dysfunctions of a team?

It’s vital for teams to have vulnerability-based trust at their core. This is where people feel safe to say ‘I don’t know the answer to that’, ‘I think I made a mistake’, ‘I’m sorry.’ No one is perfect but team members must be vulnerable and the leader has to go first. If the leader can’t be vulnerable then the people on the team can’t be expected to be vulnerable either. It is that important.

Weigh in is required for buy in. On a leadership team, everyone should weigh in with their ideas and their opinions. That doesn’t mean there will always be consensus. The importance of weighing in is that the leader can say ‘Ok, my job is to break the tie, it’s not going to make everyone happy, but I’ve taken into account everything said today.” Nobody will commit to a decision if they didn’t passionately weigh into a discussion. As former CEO of Intel Andy Grove was fond of saying: “We are going to disagree and commit.”

The primary source of accountability on a team is not the leader. The primary source are peers. The best teams call somebody out in real time. The problem is if the leader is not willing to hold people accountable then the others will think ‘well I’m not going to do your dirty work.’

Most people on a leadership on a team are focused on results but is this at the organisational level? It’s very dangerous to have a CEO who lobbies for their own former department (marketing, sales, finance, etc). It can cause in-fighting within the company. Everyone should be focused on the collective results of Team #1 – the organisation. 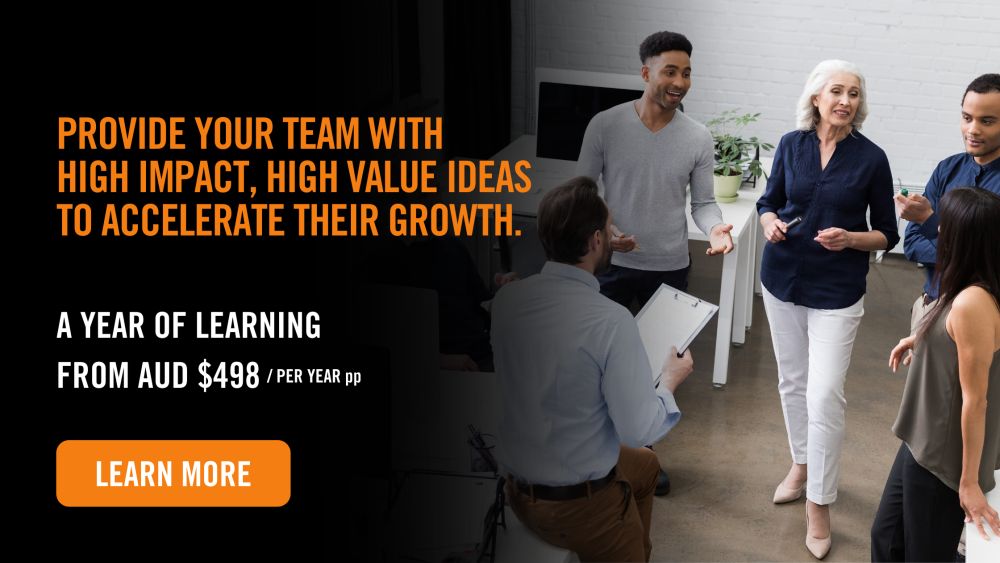 Who wrote 5 dysfunctions of a team?

It was organisational health pioneer Patrick Lencioni who wrote ‘The Five Dysfunctions of a Team: A Leadership Fable’; a story leaning heavily on his extensive leadership consulting and personal experience with CEOs and teams. Pat Lencioni’s fable follows new CEO Kathryn Peterson as she leads a fictional Silicon Valley company through challenges. Kathryn chops away at the team’s dysfunctions to build a better culture and post better results.

How do the 5 dysfunctions of a team affect results?

A team not functioning well won’t get consistently good results. One elite sports team which realised this more than a decade ago was the All Blacks rugby team of New Zealand. We interviewed James Kerr, author of ‘Legacy’, and learned that the All Blacks culture was once dysfunctional to the point it had ‘begun to rot from the inside’.

“With results declining, key players threatening to leave and cultural dysfunction endemic, the management had to act, and act quickly.” - James Kerr, ‘Legacy’

Changes were made, dysfunctions addressed, and now business leaders study this exceptionally successful rugby team to learn its healthy culture values set out as 15 mantras.

Why are the 5 dysfunctions of a team important for leaders to know?

A strong culture increases net income 765% over 10 years, according to a Harvard study of more than 200 companies (The Culture Code)

Leaders should want a healthy culture because this is core to their role. World-renowned business researcher Jim Collins recently told our Level 5 leadership event that leadership was ““The art of getting people to want to do what must be done.”

In a dysfunctional team, people are too busy blaming others, avoiding being held accountable for results, or talking behind people’s backs to ‘want to do what must be done’. The leader must take ownership of solving team dysfunction as one of the best-known Jim Collins quotes is: "One of the things we’ve learned in all our research is that it all begins with people."

What is the 5 dysfunctions of a team pyramid?

The 5 dysfunctions of a team can’t be approached in random order. Each dysfunction must be solved in correct order to enable other dysfunctions to also be solved. For this reason, Patrick Lencioni orders the five dysfunctions into a pyramid, with TRUST as the pyramid base. 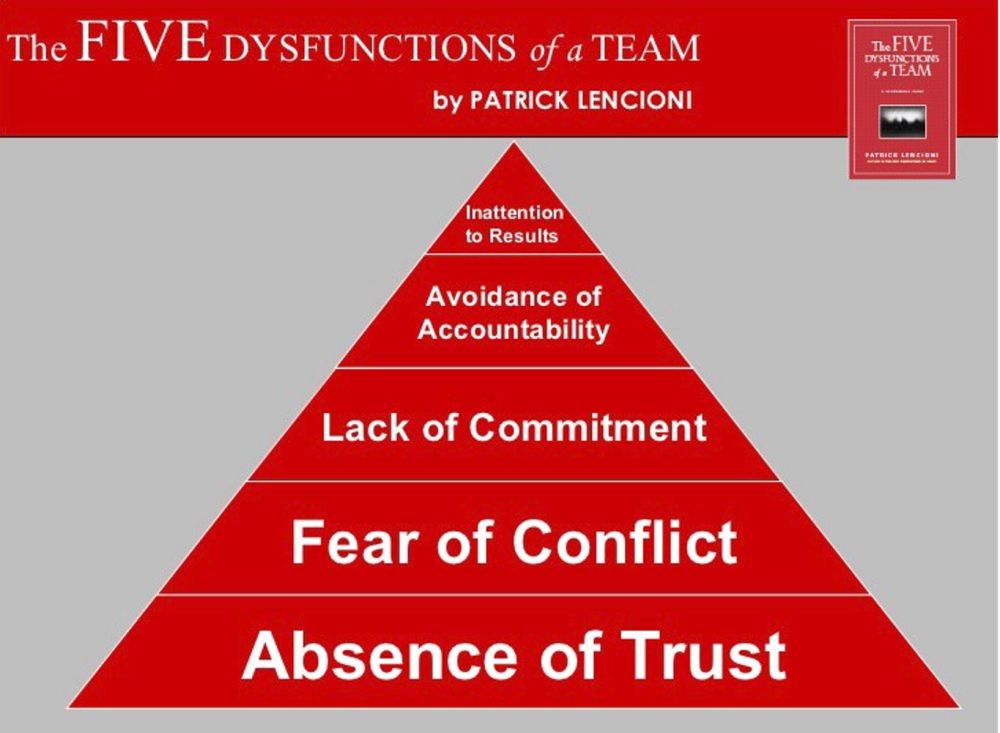 5 dysfunctions of a team exercises

Here are some suggested team exercises to start to chip away at the five dysfunctions in your team.

·       Have the team share where each of them grew up, what order in the family they are, and the most difficult challenge in their childhood. People will look at each other like they’ve just met. It’s a great leveller and makes everyone a little more vulnerable. It helps us avoid ‘fundamental attribution error” – when we judge others unfairly because we don’t understand them.

·       To get to know teammates on a deeper level, have each take the 6 Types of Working Genius leadership tool. It takes 10 minutes to fill out and 15 minutes to go over it with a team. This gives teammates permission to showcase what they’re good at and admit what they’re not good at.

When someone at work engages in healthy conflict for the first time, have the leader say ‘This is awesome! Do it more often!’ This is real time permission so they don’t feel guilt or angst. Teams that don’t have conflict are not great places to work. Teams that learn to engage in healthy conflict mean people are always free to say what they think at work.

Discourage ‘after-meeting meetings’ by strongly encouraging team members to weigh into discussions before you ask them for a commitment. Note those who are being quiet and try to draw out their thoughts on the discussion at hand. Note those who are dominating the conversation and ask for more opinions from the rest of the team. Once you arrive at a decision you are more likely to get their full commitment.

A team effectiveness exercise is to have everybody write down one positive thing that each person does for the team (by being who they are). Then one behaviour of each that hurts the team (ie. what they need to get better at). Variation: Ask each team member ‘How comfortable do you feel about making a comment about other people’s work?’

Keep a scoreboard visible. Franklin Covey’s 4DX method tells the importance of keeping a compelling scoreboard to track results. People tend to play differently when they are keeping score. Imagine for a moment two teams kicking a ball around in the park. The minute you mark out goals and announce that you’ll keep score, the individual’s and the team’s motivation soar!

5 dysfunctions of a team summary

Here is a very brief summary of 'The Five Dysfunctions of a Team: A Leadership Fable' by Patrick Lencioni.

Fictitious Silicon Valley company DecisionTech is in a desperate situation. After two years, the tech start-up is missing critical deadlines, key employees are leaving, and morale is low.

The board hires 57-year-old CEO Kathryn Petersen who has an amazing gift for building teams. After two weeks of observation, Kathryn sees that DecisionTech’s team is dysfunctional.

Jeff is a poor manager, Mikey in marketing rolls her eyes in meetings, chief technologist Martin barely participates, JR in sales is poor at follow-through, Carlos in customer support has a poorly defined role, CFO Jan is a stickler for detail, COO Nick feels superior to his colleagues. Critically, they don’t have a healthy team culture.

Kathryn introduces the team to the 5 dysfunctions model

Kathryn starts meeting her team face-to-face for ‘moments of truth’ and holds an off-site. Here she introduces them to the 5 dysfunctions of a team. She gets the team to share snippets of their childhood to get them to overcome their need for invulnerability. She talked about status and ego getting in the way of reaching collective goals, the danger of artificial harmony, committing to decisions to avoid ambiguity, and how an avoidance of accountability leads to low standards.

As they leave the offsite, Kathryn says to the team:

“During the next two weeks I am going to be pretty intolerant of behaviour that demonstrates an absence of trust, or a focus on individual ego.

“I will be encouraging conflict, driving for clear commitments, and expecting all of you to hold each other accountable.

“I will be calling out bad behaviour when I see it, and I’d like to see you doing the same. We don’t have time to waste.”

The team, minus one, starts to pull together

In the end, Kathryn has to fire a team member. But, putting the 5 Dysfunctions of a team model into action, over the course of a year DecisionTech grew its sales dramatically, and met its revenue goals during three of its four quarters.

If you'd like to increase your professional and personal development why not consider signing up your teams becoming a Growth Faculty Pass Holder? Choose the plan that suits you, and see who's up next.

9 effective ways to build trust in the workplace