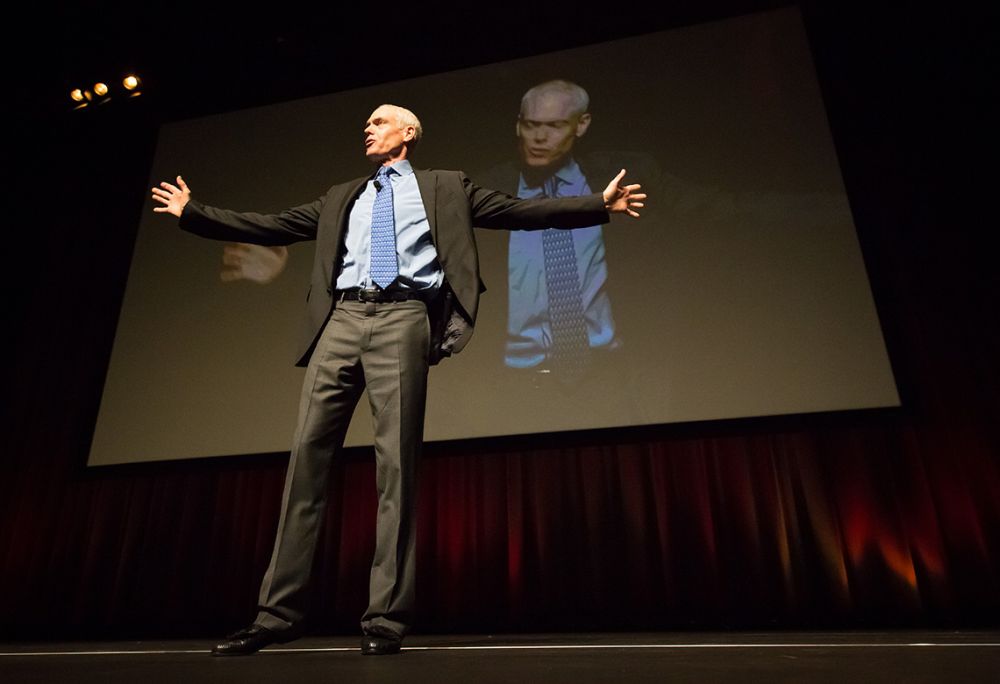 When researchers Jim Collins and Jerry Porras compared ‘great’ and ‘not great’ companies for their book Built to Last they began with a simple question: Can a good company become a great company, if so how?

So they focused on a clear point of inflection at each successful company when it left the other behind to begin an obvious trajectory of exponential growth ie. From good to great.

Excited, they asked the successful executives ‘When was the breakthrough moment?’ ‘How did you know it had occurred?’

But the executives were confused. They didn’t understand the question. They’d had no ‘aha moment’.

Instead of one key disruptive moment, they described a gradual process: A series of good decisions supremely well executed that add up one upon another – like turning a giant, heavy flywheel.

The Principle of the Flywheel

The Flywheel concept was brought out in Jim Collins’ bestselling classic Good to Great and discussed in detail in its extension monograph The Flywheel.

“Picture an egg, and then one day it cracks and out jumps a chicken,” explains Jim. “And the media exclaims ‘Egg turns into chicken!’. But the egg cracking open is just one more step in the growth of the chicken.”

The chart looked dramatic, but the executives inside the great company did not experience any drama at all. To those on the inside the breakthrough feels different to those peering from the outside.

You turn the giant heavy flywheel (a series of good decisions supremely well executed) but you don’t stop. You keep pushing. And you eventually get 2, 4, 8, 16, 32 turns. And they’re compounding, building on each other. You get accumulative momentum in the flywheel.

“If someone asks, ‘what was the one big push that made the flywheel go?’ it is a nonsense question,” says Jim.

Meanwhile, how dramatically different were the trajectories of the ‘not great’ companies. Instead of starting to build accumulative flywheel momentum, they would react to bad results. This would lead to new decisions, new developments, technologies, strategies – chronic inconsistency. This approach provides no traction, leads to more disappointing results, leading to new decision, new developments etc.

While Good To Great companies built momentum, the comparison companies had declining momentum. …and down, down, down they went in a doom loop.

The great flywheel without great people will not turn.

When the researchers asked: ‘How did you get people lined up behind what you were trying to do?’ you might have expected the answer ‘We set a new vision and motivated people to go there.”

However, while great companies had recruited self-motivated people it was also clear that alignment followed results (not the other way around):

The flywheel momentum becomes the source of alignment and engagement. The right people want to be part of something that works. They put their shoulder behind the wheel. 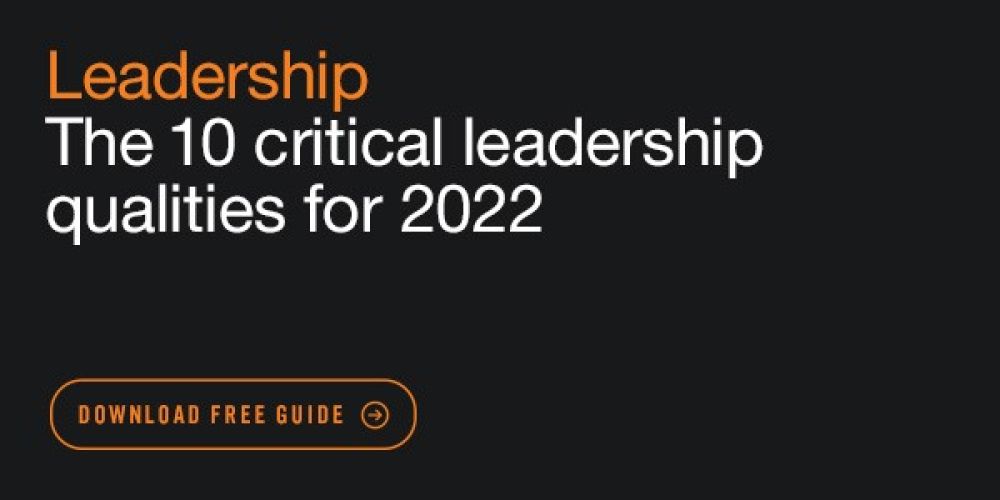 One of the most famous examples of the Flywheel is that developed by Amazon.

On December 28, 2001, Jim Collins was invited to a small company in Seattle called Amazon.com. He was invited to share the ideas of Good To Great as it was coming out. In 2001 it wasn’t at all clear if Amazon would survive as it was just after the .com crash. After the presentation they took the Flywheel concept and made the Amazon flywheel. 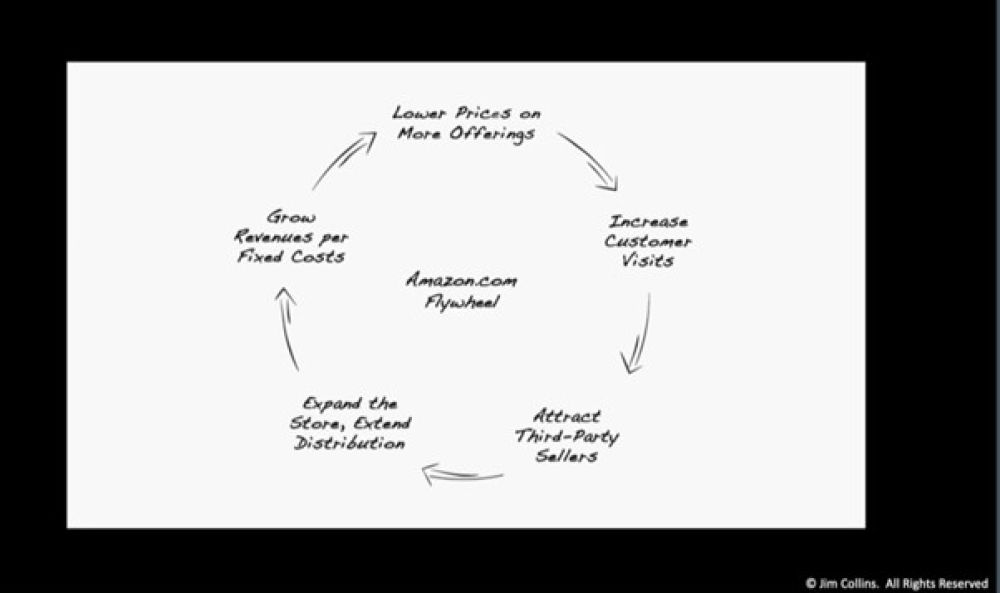 “I’ve learned over time; I trust my students and what I love is sharing what we’ve learned with you, and trusting that if you have the ideas, you don’t need me,” says Jim. “I never went back to Amazon. I taught and left and look what they have done with the idea.”

In the years since that meeting in 2001, the Flywheel has become widely used business vernacular.

Application of the Flywheel

Jim says that as the originator of the principle, he often looks at people’s flywheel and thinks ‘That’s not yet a flywheel or a truly great flywheel’.

“It is not a stack of action steps drawn as a circle,” he says. “I’ve learned a lot in the past 20 years about the Flywheel – I'd like to help people get the Flywheel right.”

Important things about the Flywheel:

·       It stems from understanding what actually works. Create a list of your big successes. Your flywheel exists in what is successful and replicable.

·       Each flywheel has a beautiful logic of momentum but they’re different.

·       You can have a cost, custom, innovation, service, culture, people, curiosity flywheel – there are lots of types of flywheels.

Since writing The Flywheel monograph, Jim has understood that Flywheels have a right side and a left side:

·       RIGHT SIDE: Is how you actualise your purpose in the world. What you do.

·       LEFT SIDE: It converts the right side into fuel. There are different versions of fuel: economies of scale, reputation, building resources.

That fuel goes back into the top of the flywheel and makes it go round and round. The point of fuel is not to siphon it off to make a bunch of people rich. It’s supposed to go back into the Flywheel. The meta architecture: it starts something that reflects something essential.

“I love the flywheel. One reason is that it’s a beautiful combination of intellectual research and rigor and on the other hand the Flywheel is about energy, momentum, extension, renewal, momentum – and that’s infectious.” – Jim Collins

Only five business authors have sold over 10 million books. Today more than 3000 delegates from 42 countries enjoyed an exclusive audience with one of them, global master of business Jim Collins.

Listed by Forbes as one of the ‘100 greatest living business minds’, Jim’s most powerful and celebrated concept the Flywheel has created an architecture of momentum for the likes of Amazon, Atlassian and thousands of high growth companies. In his live virtual Global Headliner event for Growth Faculty, Jim Collins shared the deep principles behind the Flywheel.

﻿If you'd like to increase your professional and personal development why not consider becoming a Leadership Pass Holder with Growth Faculty? Unlimited access to 40 live virtual masterclasses and Global Headliner virtual events - PLUS year-round leadership content at On Demand with videos, podcasts and book summaries. Join a community of knowledge seekers who are inspired by the best. Access $7500+ value for just $398 AUD. See who's up next.

Let the future in your mind drive your actions of today