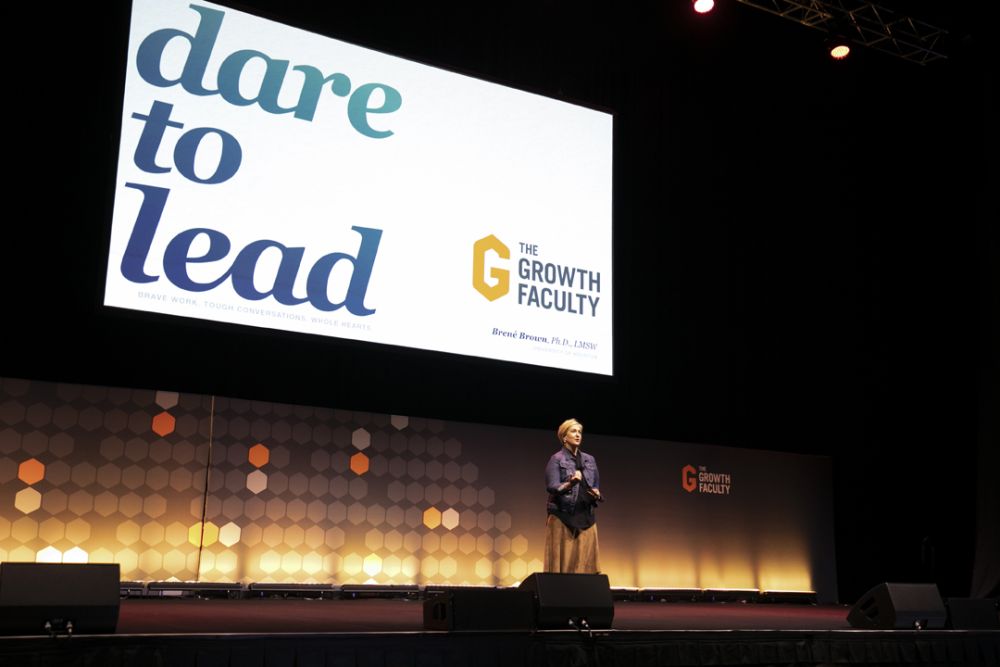 In the Arena with BRENÉ BROWN: Choosing Courage over Comfort

It's time to be brave and show up

Since our interview with her for The Growth Faculty On Demand livestream series, a lot has changed for Brené Brown. With a Netflix special, multiple best-selling books and a speaking schedule that takes her around the globe, she’s become one of the leading thinkers of vulnerability in the world.

A fully sold-out event for 8,000 Australians across Sydney and Melbourne, Brené Brown LIVE was a mix of the light-hearted yet poignant tone of her Netflix special, personal stories of sacrifice and triumph, and lessons from the extensive research detailed her famous books.

It was a morning of hard truths, tough realisations, honest reflection and the acceptance of self-destructive behaviours we often don’t recognise. But it was also an experience of joyous connection, communal singing, and bold (one might even say, brave) dancing. What was certainly clear by the end of the day: courage is a skill-set, one that can be learned and one that can benefit those brave among us to try.

The Future of Leadership

Brown posed a question to delegates as the session began: what is the future of leadership? It’s a question she’s asked the subjects of her research, and a staggering number of them answered the same way:

It’s a sentiment with which most would agree, but what do words like courage and bravery actually mean? Many couldn’t answer, simply believing it was a kind of essence you’re either born with or without, which was an alarming realisation for Brown. The issue?

We have no language for what is: when you ask people about love they tell you about heartbreak.

We have poor emotional literacy and lack a nuanced understanding of how we and others feel. Brown made it clear that it’s time to change this, and that she was ready to lead the charge.

The Case for Speaking Up

After the case was made and within just ten short minutes, the audience agreed that most of us are terrible at having tough conversations, evidenced by only a few hands going up after Brown asked, How many of you were raised with the skills to have tough conversations?

Moreover, many claim they’re simply too nice or too polite to offer friends, colleagues or family members honest feedback, instead contributing to a culture of gossip and office backchanneling.

We’re not having tough conversations.

If we can’t better manage our fears and feelings, we can’t deal with unproductive behaviour, and we certainly can’t expect innovation and creativity to flourish.

The Four Skills-sets of Courage

Emphasised by Brown, these skills are measurable, teachable, learnable and observable, and essential for effective leadership:

The Story I’m Telling Myself

In Brown’s research, what do the most resilient research participants all share? They use a version of one, simple sentence:

The story I’m telling myself is…

It’s our SFD (shitty first draft), the version of events we make up that results in a chemical reward. Identifying this behaviour and sharing this story gives us a chance to check our own limits and self-awareness, and gives those involved in said story a chance to set us straight.

According to Brown, the superpower of courageous leadership is curiosity. We may not know the right thing to say or always understand the cultural, social or personal landscape we enter, but if we have more questions than answers and show vulnerability, we’re taking the first step to understanding.

These efforts, particularly in a professional environment, are undermined by the feeling Brown describes as not being enough, which we often weaponise against other people.

Being in the Arena

Arena moments look different to each of us, but they play the same. It’s that major presentation you’re about to deliver, that feedback you need to give your partner, that tough conversation you’ve been dreading. During her Australian seminar, Brown warned audiences that these moments are when we’re most vulnerable to shame, scarcity and comparison, but what we really need in these situations is empathy and self-compassion. It's time to start talking to ourselves the way we speak to those we love.

The lessons from Brené Brown LIVE were numerous but the overarching message was clear: be vulnerable and show up. This can be summarised in the following:

Hearing Brené Brown speak is almost like catching up with a friend. She recognises your vulnerability, encourages your bravery and calls you out the way only a friend could. Perhaps her message is particularly relevant at this cultural moment, but maybe not. In many ways it’s timeless, distilled in her final call to action: be brave, show up, be afraid and feel alive.

I’m cheering you on and I’m in the arena.

Our favourite quotes from Essentialism by Greg McKeown