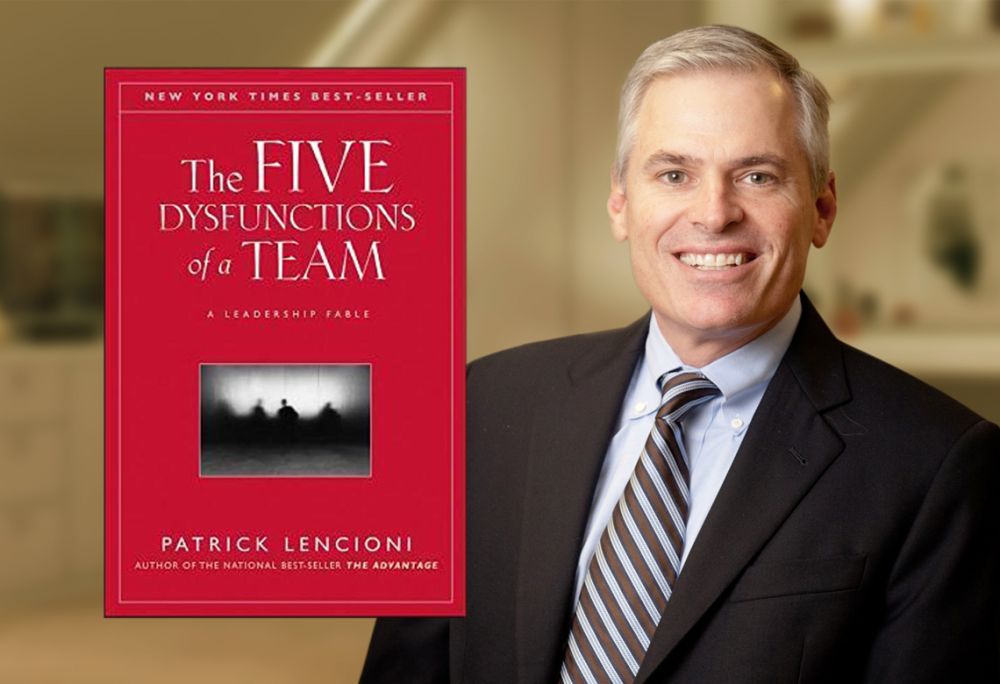 GREAT IDEAS: The Five Dysfunctions of a Team by Patrick Lencioni {Interview}

Lessons from our interview with Patrick Lencioni

If your team's mediocre, or falling apart, or not kicking goals.....you have, my friend, a dysfunctional team. Dysfunctional teams are the polar opposite of what you need right now. With a complex, volatile, and uncertain future business landscape, you need smooth-running teams with impact players and Level 5 leaders working towards a common goal. In his interview with The Growth Faculty, Patrick Lencioni told us key concepts behind his book 'The Five Dysfunctions of a Team' and what simple steps leaders and teams can make to improve team dynamics:

Dysfunction number one: Lack of Trust

Teams can be destroyed if members are not capable of being vulnerable with each other.

Trust means that even if you disagree, even if you’re frustrated at each other on an intellectual level, it’s not going to transfer to interpersonal conflict. You’re just trying to find the best answer.

When there’s no conflict, when people don’t weigh in, they don’t really buy in.

They sit in a meeting and they nod their heads and go, “Okay, well we can do that.” And then they go back to their team and they say, “I don’t think this is a very good idea.”

The primary source of accountability on a team should be peers.

The best teams in the world don't see a problem and tell their manager. Rather, they do something about it themselves. On a really good team up to 99% of the accountability is peer to peer.

The CEO has to say the results of the company are more important than any of the departments. Otherwise, they’ll pay attention to their own results, their department, their budget, their career, their ego.

PATRICK’S GREAT EIGHT, our eight getting-to-know you questions we ask our authors.

If you could co-author a book with anyone, who would it be, and what is the book title? Fiction writer Dean Koontz. He wrote a series of books about a neurodivergent character whose name was Odd Thomas, O-D-D Thomas, so it’d probably be something about him.

What's a great bit of advice you could share?  Be humble because it’s the ultimate virtue. It’s what allows us to build deeper relationships with people.

What's been your lowest moment, and how did you recover? My father passing away… (also) eight or nine years ago I hit the wall in my career and in my work and in my life, because I wasn’t finding any joy in it anymore, because I think I lost sight of why I was doing it. And so I had to stop everything for two weeks, and really pray and find my purpose, and realise that everything I thought I was working for wasn’t real.

How do you relax? That is my biggest challenge. I don’t relax. I have four boys, I love them and I love my work and it’s all very busy and I love my wife. Relaxing for me is if I can go out and play nine holes of golf with one of my boys, there’s really nothing else I can do. So it kind of contains me. I’m terrible at it, but it’s fun. So, golfing, which I should probably commit to doing more.

What’s a fun fact that’s not widely known about you? Oh, oh, here’s one. I think this is kind of fun. I have obsessive compulsive disorder and I’ve had it since I was five years old, which means I did all these little quirky things that most people didn’t know about, like counting on things. And every number has a gender and a personality, leading up to 12.

What's the secret of success? Loving what you’re doing in that moment. Don’t do something because it can make you rich, or because you think it’s going to lead to something later. Love it in the moment.

What's a prediction for 2025? I think people are going to realise that tech, the promises of technology are vastly overrated.... that it’s not satisfying, and in fact it’s dangerous. Hopefully they’ll realise that they need God to be satisfied.

﻿If you'd like to increase the leadership qualities in every team in your organisation why not consider a Growth Faculty 'team' Leadership Pass? 12 months of unlimited access to 40 live virtual events with the world's brightest minds - PLUS, you get access to year-round leadership content on demand with videos, podcasts and book summaries.

Join a community of knowledge seekers who are inspired by the best. Choose the plan that's right for you and your team and See who's up next.